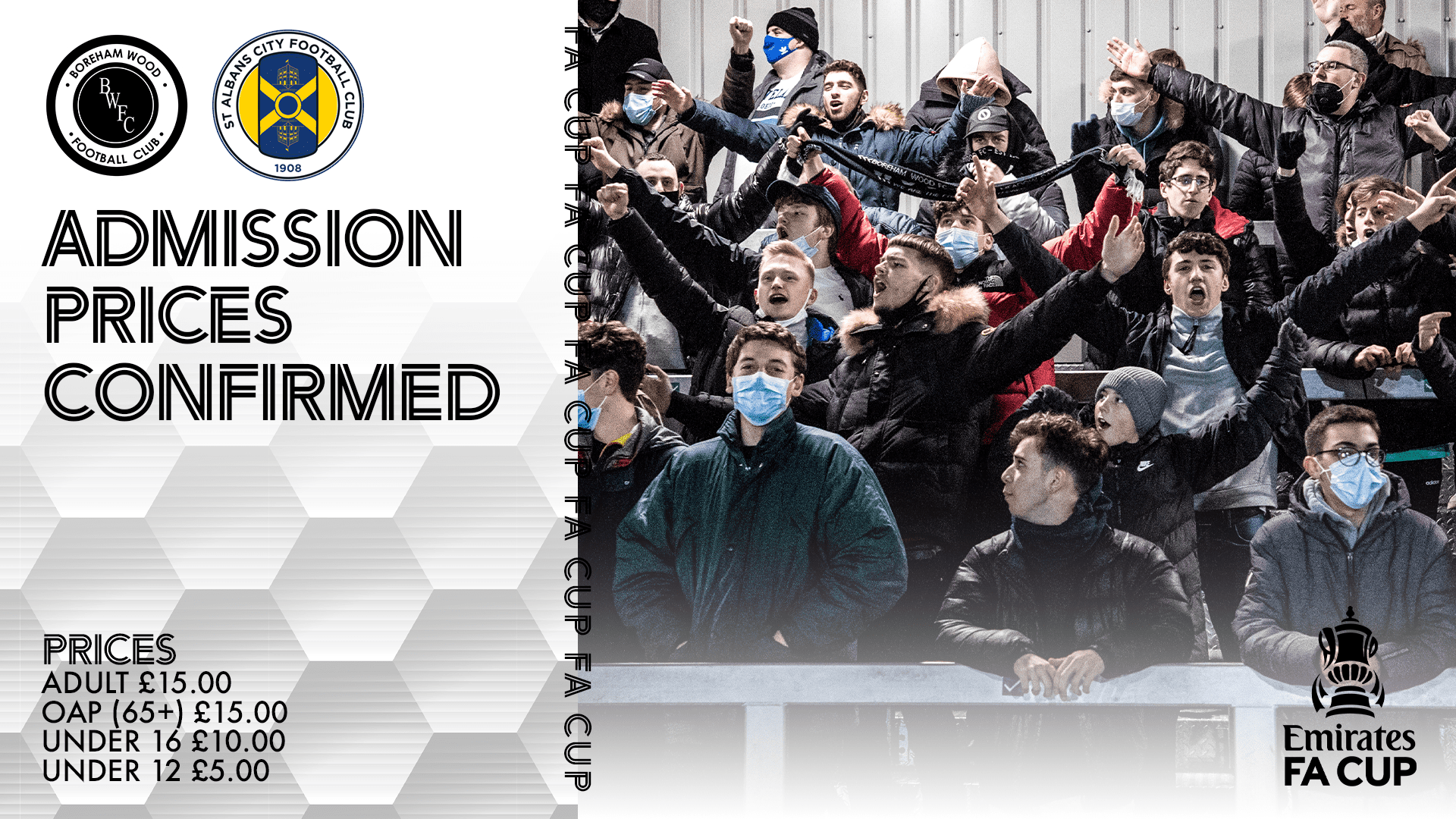 Emirates FA Cup prices will be set as per the 1st Round Proper match against Eastleigh FC and are as follows: –

Wood Chairman Danny Hunter said, “We’ve looked at our security, stewarding, gates and all of the necessary staffing levels, as well as other match day planning issues, and I feel we’ve come up with what I consider to be a fair ticket price for a game of this importance…

“I feel that this game now belongs to the very loyal fans of both clubs; it is of course a local Derby, so careful planning, security and safety has to also be paramount, but it is a Hertfordshire Derby and for one club it will be a joyous occasion, as it is in essence an Emirates FA Cup Final for our two clubs. I suppose there is already a sense of a ‘winner takes all’ feeling to this match, but when some of the noise stops it still has to be about two dressing rooms, two partisan sets of supporters and two well run football clubs.

“I hope the pricing levels will help both sets of fans, and even a few of the neutrals who do want to come down and experience a live FA Cup Derby and atmosphere, hopefully watch a great game of football in an improving ground, and enjoy two partisan sets of Hertfordshire supporters who will create a cracking atmosphere, I’m sure.”

When asked about the danger of selling out the LV Bet Stadium Meadow Park, Hunter said “I, of course, hope and expect a very good crowd on the night, but as we’ve only ever sold-out Meadow Park once in my 23 seasons here as Chairman, I’m not so sure. That sell out was way back in 2000/01 and was against an Arsene Wenger, Tony Adams and Dennis Bergkamp led Arsenal team, so I’m not so sure a sell out is quite on the cards but we’ll see.

“What I can guarantee everyone, is there will be a great Non-League atmosphere and I can guarantee our Town and the Wood Army, just like their St Albans counterparts, will be up and ready for this one. When I look back on things, our home crowd has often made a huge difference to us in the big games in our recent past.

“They were magnificent when we won our two play-off finals, when we knocked out Blackpool just a few years ago, and we are unbeaten at home in our recent two National League play off quarter finals, beating both Fylde and Halifax… So I know the Wood Army will certainly make their presence felt on the night and our dressing room knows how to win big games, that’s for sure…

“In terms of a sell out, I’m a realistic Non-League Chairman and when the hype and noise perhaps dies down a bit, we’ll know how ticket sales are going, but I will not be expecting a sell out. I do though expect a very, very healthy turn out from two rival Non-League football clubs, who will hopefully make for a wonderful occasion, a fantastic atmosphere and a magical night full of FA Cup drama.” Hunter concluded.