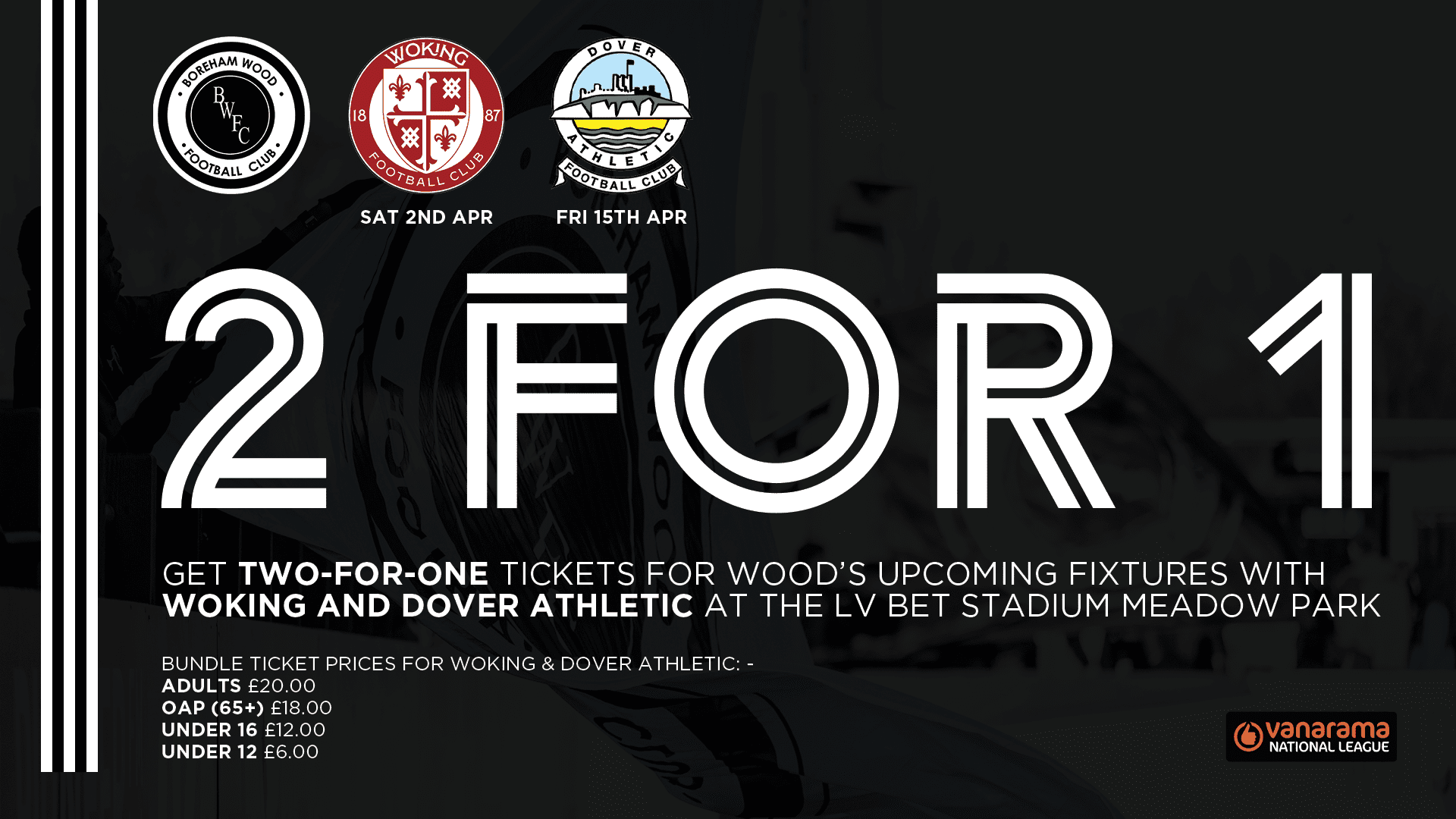 Wood Chairman Danny Hunter has given an impassioned plea for the local community to be a part of a big push from the fans in creating a ‘Wood Army’ atmosphere at Meadow Park for the next two home National League games.

Hunter believes that without at least four points from those two home games the play-offs could become a distant dream. As such, the Wood Chairman gave a realistic appraisal of the state of play to the ‘Wood Army’, with just 12 league games remaining, to the old school and relatively new Wood Army fanbase.

He gave his thoughts through the Club’s Supporters Liaison, Travel and Club Shop Manager Grant Morris and said, “We’ve already enjoyed an amazing season, which I feel has united our Club, Town and Community like no other in my memory. We’ve all shared the most incredible FA Cup run, which history told us, had only ever been enjoyed by a handful of non-league clubs and their communities [since World War Two] and oh my God – didn’t we enjoy it!?”

Hunter continued, “I accept the cup run is now well and truly over – but it’s my job as the Club Chairman, to keep banging the drum, keep a positive mindset to reignite our Club, reignite our Town and reignite our Community to ensure that Luke and the dressing room continue to receive the hugely improved home support levels, up 58% from two years ago, and ensure our newer support base doesn’t fade away…

“We simply have to go again as a collective and all support Luke and the player’s efforts. We must understand what an incredible achievement it is to challenge at the top end of the table in the National League; when competing with the huge budgets and incredible crowd averages of Wrexham, Stockport County, Notts County, Chesterfield, Grimsby Town and Southend United.

“To hit a sticky patch should be expected – but let’s not give up on our dream of reaching the Football League next season, certainly not until the play-offs are taken from us and, trust me, with continued support, they won’t be. Our dream is still well and truly alive, it’s nowhere near extinguished just yet and we are still right in this Play-Off hunt, albeit we’ve hit a difficult patch.

“Nothing in essence has changed. Yes, expectation has risen but we are still an underdog Club, and in truth we are still an underdog Town, so let’s embrace that expectation, as the big clubs will be feeling enormous pressure very soon. I see the run in as a chance to burst a few big ex-league club’s bubbles and I refuse to let an incredible cup run define our season, not when the play-offs and a shot at the Football League are still well within our grasp.

“As such I want to offer a hugely discounted admission price, two-for-one entry, for every local school, all local boys or girls football club, whatever the ages, and of course reward those people who have cheered themselves hoarse throughout our incredible FA Cup run.

“These supporter discounts are aimed at both our “new” and “old” supporters who have either returned to their community Club through the cup run or for the newer fans, who have at the same time, found a sense of belonging, community and love for their non-league Club, who have different values to the big local pro clubs, or simply like the friendships and feeling of making a bigger difference at a local level.

“For the first time in our 74-year history we are at present averaging over 1,000 people at our home games. As such, I want to reward our supporters both “new” and “old”, with a two-for-one match entry ticket offer, for the next two vital home games against two southern based clubs in Woking and Dover, who would love nothing more than to kill our season”.

Hunter went on, “We really are going to need both the new and old school ‘Wood Army’ diehards to come out in their numbers, to get us through this sticky patch by turning up for the next two of our remaining five home league games. If we can add that extra support from what is a growing fanbase, whether that’s from our local Sunday teams or from our local schools and partners, then that should ensure the North Bank is rocking, it will mean two decent crowds and that’s a huge step to a possible six points.”

The Wood Chairman finished by saying, “A season is like life – it’s long, it’s difficult, it’s hard work and it often kicks you in the teeth – but football always does what you least expect it to. So, if we can stick to the fight when we’re hardest hit, which I know our supporters appreciate, then the club’s investment, its structure, and its belief in each other, aligned to Luke, the players and my staff’s hard work, it will give us a chance.”

“I know the community appreciate the great strides we are making, and I know they will back us over the next seven or eight weeks – if they do, then they give us every chance of making the Play-Offs and giving us an underdog’s shot at the EFL.”